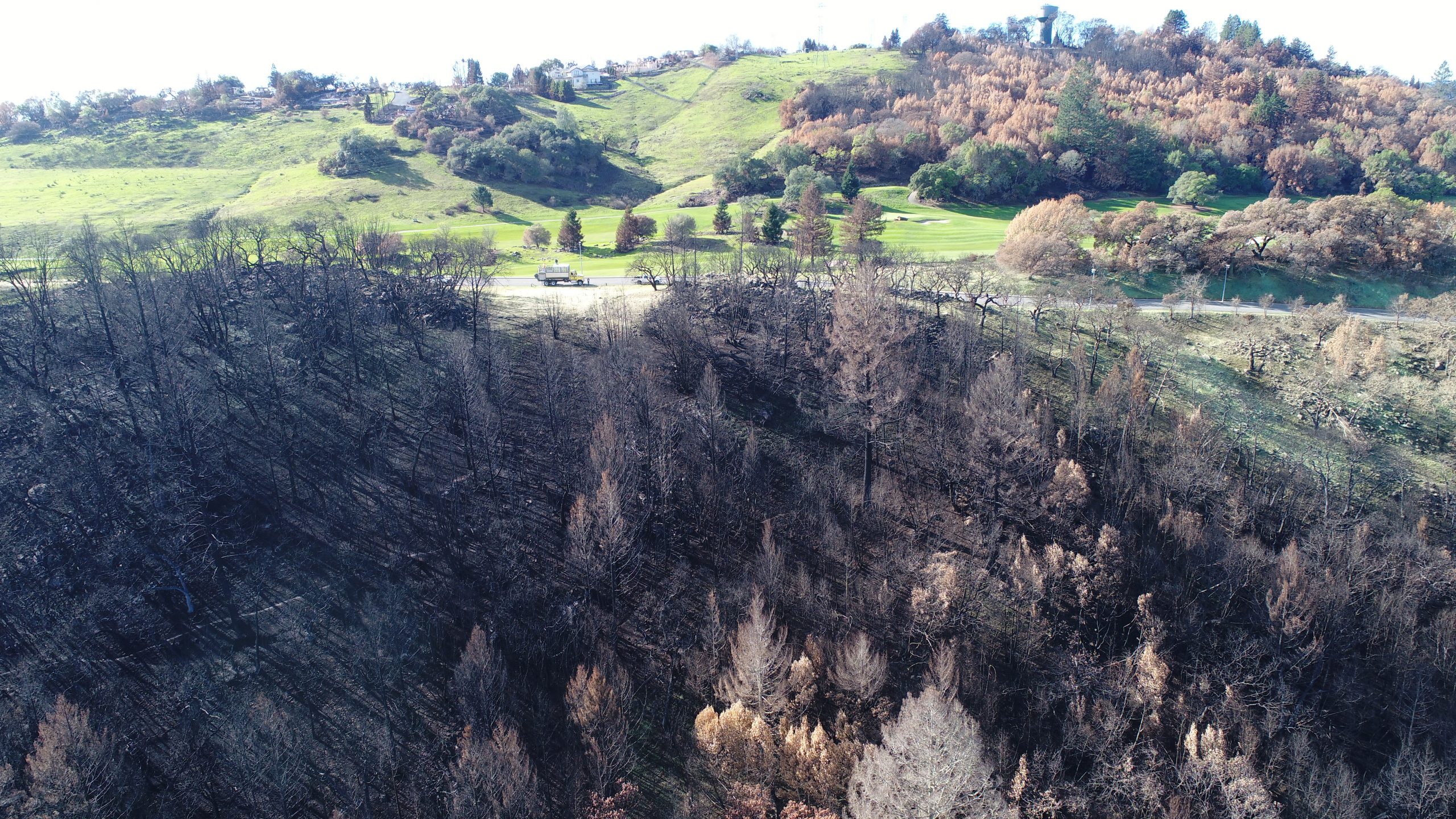 When the Tubbs fire swept through the city of Santa Rosa in October 2018, it was the most destructive wildfire in California history. The fire would ultimately claim over 4,658 homes in the hard-hit Santa Rosa area.

But even once the initial danger and devastation of the wildfire have passed, there is more work to be done. The area’s winding and mountainous neighborhoods proved to be challenging for recovery and rebuilding teams to navigate. After the fire was put out, burnt structures had to be cleared and the scorched earth reseeded to prevent erosion and future natural disasters such as mudslides since the rainy season in the region follows closely on the heels of fire season.

After the wildfire, FEMA crews removed burnt-out structures and dug out soil that was potentially contaminated when household chemicals were heated to extreme temperatures. Then, in order to prevent erosion in the steep hills of Santa Rosa, the areas surrounding the structures needed to be reseeded. The sooner vegetation was established, the better; plant roots would hold the soil in place and reduce the amount of soil washed away by subsequent rains.

The neighborhood of Fountain Grove posed a particular challenge. The difficult-to-reach neighborhood is home to multi-million-dollar houses on steep, winding roads. Reseeding the neighborhood was going to require hydroseeding equipment with the reach and tank size to handle the massive job efficiently. Fortunately for Santa Rosa, Selby’s Soil Erosion Control Company had a fleet of Apex hydroseed applicators just a few miles down the road.

First Steps Once the Fire’s Out
While Santa Rosa was still burning, the company’s owner, Jay Selby, raced from Newcastle, CA, to meet with the city to discuss solutions. Familiar with the city and having worked on similar projects before, Selby proposed a course of action that would protect the area’s drainage systems and creeks to further prevent erosion. After his pitch was accepted, Selby and his team utilized iPads, GIS software, severe burn maps, and terrain steepness overlays in order to devise a plan to best treat the 200-acre parcel that had been budgeted.

With little to no warning of the impending wildfire, survivors of the Tubbs Fire hadn’t had time to pack, often leaving their homes with only the clothes on their backs. This made rebuilding efforts more difficult because before any reconstruction work could begin, crews first had to remove and recycle everything—steel house framing went one place, burned-out vehicle carcasses were shipped somewhere else. Crews then removed the toxic waste created when common items like household cleaners or substances burn at high heat. This was accomplished by removing a 6-inch layer of soil and testing the remaining soil for contaminants. If any heavy metals or other contaminants were found, they’d remove another 6-inch layer of soil. Once the soil was clear of contaminants, Selby had the green light to start hydromulching the house pad. Doing so quickly was important because each passing day brought the region closer to potentially devastating rains.

Pumped for the Job
Since Selby’s Soil began 50 years ago, Jay Selby and his father have grown the business into a leader in the industry, with a fleet of 10 hydroseed applicators and experience in an array of applications. Half of Selby’s fleet are Apex models, and for a good reason: they are large and efficient hydroseed applicators.

Selby’s Apex equipment allowed his team to hydroseed the Fountain Grove job site quickly and effectively, with powerful vortex pumps that extended Selby’s reach onsite. Apex applicators use centrifugal pumps with a vortex impeller, which moves the mulch in a circular direction, so slurries circulate along the perimeter of the pump and have little to no contact with the impeller. This allows delicate seeds and nearly any viscosity of material to flow freely through the pump.

The vortex pump combines with minimizing twists and turns in the suction pipe to allow for the discharge of the entire tank of material without clogging, ensuring steady flow over long distances, greater efficiency, and consistent, high-quality results.

Selby was able to spray up to 300 feet from the truck, allowing his crew to access water from fire hydrants on the street and cover huge areas without leaving the street. The steep lots—often as steep as a 1:1 grade—limited Selby’s access to large parts of the project. With increased power from the pumps, reaching the farthest corners of the large lots was no problem. Dual cannons allowed Selby crews to spray fire-ravaged areas from the nozzle closest to the impacted area. This creates “really clean lines without mess on the road and overspray,” says Selby.

No More Spray and Pray
At Fountain Grove, Selby covered 100 acres using 3,500 pounds of EarthGuard Fiber Matrix per acre, along with some fertilizer and a native seed mix. EarthGuard Fiber Matrix prevents erosion by locking soil particles together and prevents fine sediment like ash from being dislodged by water or wind. Selby was particularly concerned with ash and light debris clogging storm drains and leading to roadway failures.

Twenty years ago, working on a job like Fountain Grove would have meant multiple passes using a thinner mulch, because the hydroseeding equipment simply couldn’t get thicker material out of the tank. Now, Selby is using thicker mulches with more glue and fiber—and putting it down at a heavier application rate.

“You put in thicker material—and more of it—mix it faster and spray it farther. You get more done every day and that starts adding up,” he says.

Using the Apex hydroseed applicators, Selby averaged one ton per tank-load per hour, and he was able to cover far reaches of the massive lots and hillsides from the street.

Tanks for Nothing
At difficult-to-reach job sites, refilling hydroseeding tanks can cost valuable time. Apex units are designed wider and shorter than other models to maximize tank capacity, which allowed Selby to stay on the job and spray longer than he could before. A comparable hydroseeding tank that is up to 4 feet longer would extend the wheelbase and decrease maneuverability on the job site.

Making a profit on large-scale, hard-to-reach jobs like Fountain Grove means maximizing equipment with the fewest stops possible to reload the tank. Selby used one 4,000-gallon truck and two 3,300-gallon trucks and covered 50 acres in a week. His operators were able to navigate the winding, debris-strewn roads that led to Fountain Grove because of the shortened design of the Apex applicators. Once there, crews spent less time refilling and more time spraying, thanks to the large capacity. In total, Selby spent a year treating house pads in the neighborhood, building a solid foundation for future residences.

Ready for Regrowth
Faced with large-scale destruction and difficult to navigate terrain, preventing erosion and stabilizing the fire-torn town of Santa Rosa proved an immense and critical task. With large capacity tanks and powerful pumps, Selby’s Apex hydroseed applicators made the difference on a challenging project.

After the fires, Santa Rosa adopted “Resilient City Measures,” to address housing and economic development after the fires. Just months after Shelby’s team finished their work, the devastated city made good on that promise. New construction is underway in the neighborhood and homeowners and residents of Fountain Grove continue to build their new neighborhood, one protected from erosion, primed and ready for regrowth.