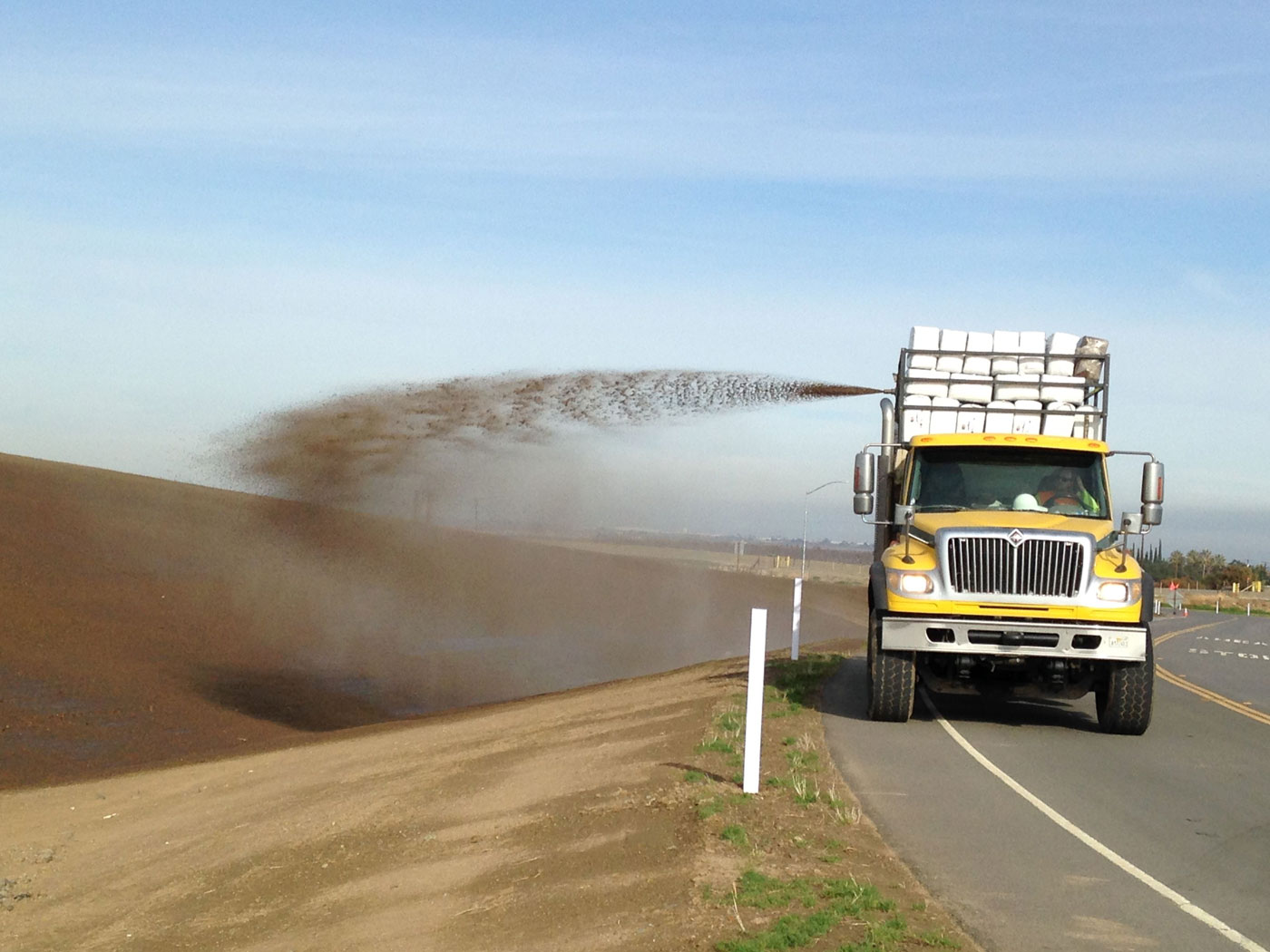 In 2013, CalTrans awarded Selby’s Soil Erosion Control the contract to revegetate approximately 30 acres of land surrounding a new overpass near Tracy. It included dry, flat soil along Highway 132 and slopes as steep as 2:1 on the abutments of the new on and off ramps.

The CalTrans specification called for applying 1 inch of compost onto the soil and then hydroseed, but Jay Selby, the owner of the Newcastle, CA-based company, which does work on erosion control projects for landfills, new developments, gold mines, and levees as well as for CalTrans, had another idea.

Applying dry compost before seeding has its disadvantages. The application can be dusty. The compost can erode with wind and rain before the vegetation becomes established, and when it isn’t tilled into the soil, it doesn’t provide as many benefits as it could otherwise.

Applying compost hydraulically eliminates the dust and erosion. If the area is seeded, the fibers in the mix absorb up to 10 times their weight in moisture so the seed germinates faster, Selby says.

But Selby was determined to find an improvement to compost to shoot hydraulically, one that would be acceptable to CalTrans.

“They’ve had it for a few years now,” Selby says. “This is the closest hydraulically applied product that matches CalTrans’ specs. It’s a derivative of compost, but it has a lot higher nutrient base. Where TerraVita will be superior to compost is that it will keep feeding the soil.”

TerraVita HGM contains growth mediums; microbial growth stimulants; a small amount of wheat straw, thermally and mechanically processed to remove seeds and ensure consistent and even degradation; a tackifier; and a soil stabilizer.

“Organic Earth has worked hard with us for quite a while to get this to work with CalTrans,” Selby says. “When Kevin [Loucks] found out we were presenting CalTrans with a change order, he jumped on a plane from Colorado to help convince them.”

Selby and Loucks met with the CalTrans engineer on the project site. The engineer sent them to the CalTrans regional office in Stockton to talk to the landscape architect. They had the change order in one day.

Most of the project took place between February 12 and 18, 2014, which is late in the season for California. Ideally, seeding takes place at the beginning of winter, when there’s more chance of rains in the following months.

Selby’s is doing a trial run with CalTrans and documenting the results.

The soil was graded on the entire site. On one small plot, crews spread regular compost. On the majority of the site, they used TerraVita.

They used a second product by Organic Earth on three other test plots. Earth Essence is a hydraulic growth medium that contains mulch (HGM2), so it doesn’t require an erosion control mulch on top. They hydraulically applied Earth Essence Beta on one slightly sloped area, Delta on some of the steeper slopes, and Omega on the steepest, 1:1 slopes.

The seed mix was specified by CalTrans. “CalTrans has landscape architects who see what’s going on in the particular area,” Selby says. “Every mix is different for every project.”

Selby’s used 31 pounds of seed, 1,425 pounds of 16-20-0 fertilizer, 1,500 pounds of fiber from Hamilton Manufacturing Inc.’s NaturesOwn Fibermulch, and an organic tackifier at 180 pounds per acre.

CalTrans will monitor the revegetation.

“It’s difficult to put timeframes on this kind of project because they’re so weather dependent,” Selby says. “Native seeds need at least four or five days of the soil being wet in order to establish germination, as well as sunlight and soil temperatures above 50 degrees. By mid-March, although there were only a couple of rains, I saw growth establishing. You have to allow nearly two years to establish mature vegetation of native seeds. Once the seeds germinate, these Organic Earth products will sustain the vegetation so it can continue to grow.”